Nedelni lide (The Sunday people), were formed in 2004 in Prague. At the beginning they had operated mostly between Brno and Prague but stepwise the action range extended. Since that time Nedelni lide have played on many festivals in the Czech republic (Babi leto, Krakor, Kubafest, Potulny delnik, etc.), they also took part in Unijazz parade Alternativa 2005 and with pleasure they accepted an invitations to Budapest, Debrecen, Szentendre or Wurzen and Leipzig.

In 2005 they released, still as quartet, their eponymous debut. Shortly after new bass-guitarist came and the make-up of band was also extended with a trombone.
In 2008, in cooperation with label „Ears&Wind records“, Nedelni lide released album „Hneteteto“, which has been positively accepted in reviews.

Current lineup of band is

Because of earlier experiences of each member, band absorbs various influences, quite complicated rootsystem of Nedelni lide derives from punk directness, industrial aesthetics or underground same as from rock, jazz or avant-garde. Almost impolitely, NL sometimes borrows motives and progresses from classical or pop music for their needs.
Each part of this coctail is sometimes encouraging, sometimes contesting or disputing with others, dissappearing or interlacing with them to reach the final view. Important to say, Nedelni lide do not always use their intruments in a correct way.

Some members are active also in literature and visual arts, therefore the bands´ output often strive across extramusical enjambements for more compact expression, which is hard to subordinate to concrete form or style.

In 2010, with a shortened name NeLide (NonPeople), band accompanied an exposition of JKF´s pictures made from metal sheets called „Roof-works“, where pictures also took part in band as musical instrument. There is also possible to find non-musical or D.I.Y. objects in instrumentarium of many songs, which enrich all performances not only with sound, but also in visual way. 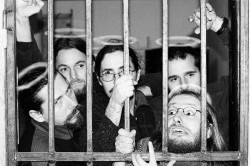